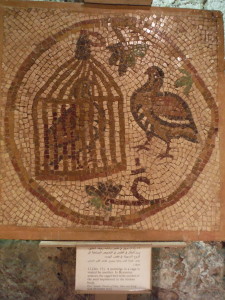 From the Museum of Popular Traditions in downtown Amman. The caption reads, “A partridge in a cage is visited by another. In Byzantine sources, the caged bird is the symbol of the soul imprisoned in the human body.”

Given my opportunity to travel – my second time in the Middle East – I had some conversations that I feel responsible for sharing. Americans cannot pick up a newspaper and find out some of the sentiment in the Middle East – and multiple folks I’ve talked to here have brought up in conversation their hatred of ISIS. Having been here a week, I don’t want to tell you about the composition of Arab public opinion. You can read actual research on that. I mostly want to share first hand my conversations with a guy named Muhsin from Iraq, who worked at the hotel where I stayed.

ISIS’s victims are primarily Muslims who don’t conform sufficiently to their interpretation of Islam, and Muhsin told me his brother was one of them. Many (though I’d say, not most) men in Islam wear a beard because the Prophet Muhammad did, so that’s a cool thing you can have in common with someone who’s changed your life (my interpretation, not the official consensus). While there are many rules in Islam, there’s also free will, but ISIS enforces on others what they ought to be free to choose willingly…and then the maniacal part comes in, Muhsin said his brother was killed in cold blood for being a barber. He said he hated ISIS for that – but there’s more to the tragedy of what ISIS has taken from him. There was a wonderfully lyrical muezzin who gave the call to prayer at a mosque near the hotel. Hearing that one day, Muhsin said, “I love my God, but I no longer pray.” When I asked him why, he said that the association of Islam with ISIS had perverted his own religion to him. If you’re a person who draws key elements of your identity from your religion – like I am – you’ll know that being alienated from worship would be akin to getting your heart ripped out of your chest. Muhsin wanted to move to America, because he thought that there he could forget about all the misery he’s seen here and just live a life. While that sounded like a “streets paved with gold” fantasy to me, there is suffering here that goes beyond the American experience. 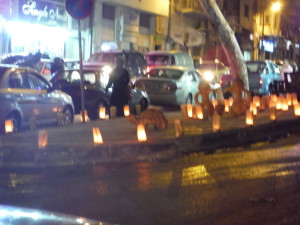 Reading over the State Department’s travel warnings, I was reminded violence doesn’t go away when I stop following the news about it. Hundreds of people are dying in Syria and Iraq every week, Lebanon is (again) in a state of upheaval, and Al-Qaeda has made Yemen a place where there are children who live off the trash of relief aid recipients (if you can call that living).  If this is depressing you, know that there are peaceful, creative resistance efforts. The human spirit is probably weaker than demagogues, but it never fails to make a stand.

Jordan has neither a warning nor an alert; that’s a green light to travel there. The violence is unlikely to touch me here, but it’s harder to ignore its impact than at home.

2 thoughts on “Daesh and Devastation”