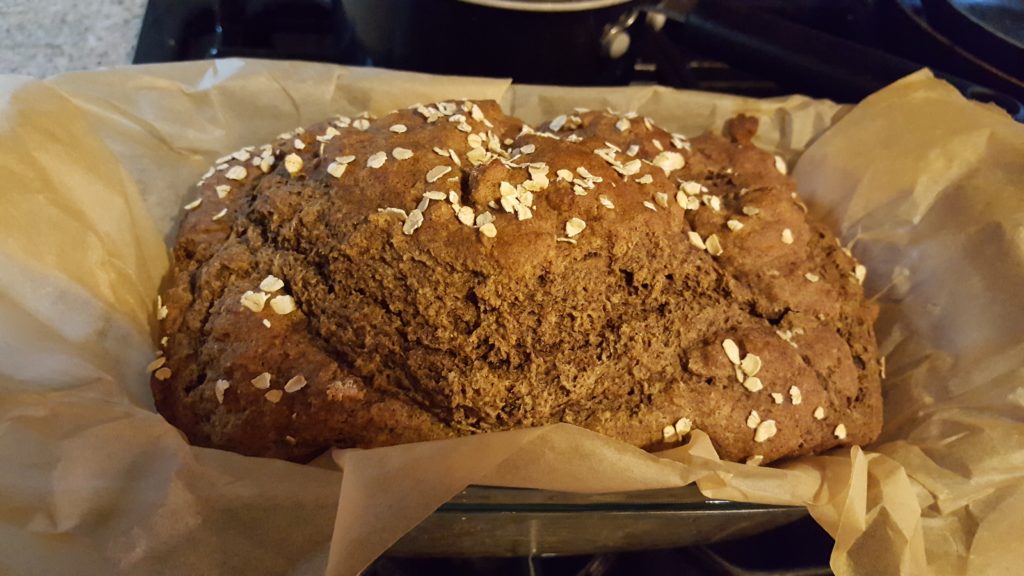 Inspired by “brown bread” ubiquitous in Ireland, where I’m told every family has their own variation based on their preferences

A vestige of this can be found in American grocery stores at St. Patrick’s Day called “Irish Soda Bread” which is white and smooth and full of dried fruit, losing the appeal of the rich brown color that the following recipe is going for. The most essential Brown Bread recipe is made of flour, buttermilk, baking soda, and salt. So you won’t go wrong with those, and what follows are my favorite embellishments…at this moment. This year I craved sweet in the winter and savory as the weather warmed up. 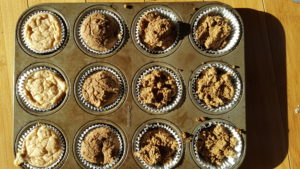 One week’s experiments…looks like in ratios of varieties of flour. I’ve really got to keep better notes if I want to be a scientist.

Brown Bread lends itself to endless variety and is truly democratic because it comes together as easy as cake mix – no kneading, no rising, just a few dishes to clean up. I’ve found the part that takes the most work (for a stressed-out person) is planning ahead to buy a pint of buttermilk (as once you’re in the habit, you’ll have all the other ingredients on hand), then completing 3 brief tasks in 2 hours: set out the refrigerated ingredients that need to come to room temperature, 1 hour later throw them all together and pop into the oven, 1 hour later be home to take the bread out of the oven and turn the oven off.

Overall, making brown bread is one of the few habits that I was able to hang onto during a whirlwind year when I got married, bought a house, and started a full-time job for the first time in two years. That’s because it was relatively low effort as a weekend to-do, definitely low cost (compared to buying cereal, for example), made me feel a little accomplished – especially when it filled the house with the smell of warm bread, as if I had my s*** together when I was really white-knuckling it – and it supplied an easy breakfast for the workweek that could come with me on the bus.

If I had extra time and energy, I would toast 1 of the cups of the whole wheat flour in a pan for 10 minutes, stirring constantly, to bring out wheat’s nutty flavor and darken the color of the bread – keeping an eye on whether this led to needing more buttermilk when combining the wet and dry ingredients. Like I said, endless variety. What follows just lays out the basics for success.

Kitchenware AKA stuff you’re going to have to clean up:

Savory Loaf (This version is noticeably salty, you may want to use just 1 tsp salt.):

When I first began experimenting to find my preferred Brown Bread recipe, I found the following recipes focusing on authenticity, simplicity, and added molasses for sweetness and darkness useful for reference.